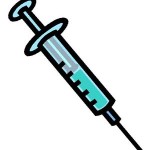 I guess you would have to of been living in a cave the past couple of months not to of heard the rumblings of the swine flu, the vaccine, the devastation…… they would have you believe the Apocalypse is upon us if we there is not enough vaccine to go around. I guess I better state this upfront as not to alienate any other chiropractors but the comments and positions are mine and not a position of the chiropractic school or association.

So every year there is a strain of flu that tends to make its rounds across the globe. It is just one of those viral things the human race puts up with. The answer according to some positions is to get the vaccine to stop the flu. The only problem with that is that the vaccine does not protect 100% of the people injected. Did you know that according to Hugh Fudenberg, MD, the world’s leading immunogeneticist and 13th most quoted biologist of our times (nearly 850 papers in peer review journals): His research concluded that if an individual has had 5 consecutive flu shots his/her chances of getting Alzheimer’s Disease is 10 times higher than if he/she had one, 2 or no shots. Dr. Fudenberg said it was due to the mercury and aluminum that is in every flu shot. The gradual mercury and aluminum buildup in the brain causes cognitive dysfunction. Flu shots contain 25 micrograms of mercury. One microgram is considered toxic.

I didn’t catch the full content but this morning on one of the American morning news shows there was a headline about the serious risks of the flu vaccine. Ya think! You put foreign chemicals into your system and you think that the body just accepts these things?

According to Dr Walter R Rhodes in the history of Chiropractic during the Spanish Flu Epidemic many statistics came to light. In Iowa, 50 medical doctors cared for 4,953 cases, with 274 deaths. In the same city, 150 chiropractors including students and faculty of the Palmer School of Chiropractic treated 1,635 cases with only one death.

Yes, the medical profession was seeing a majority of the worst of the worst; however, one of the greatest statistics backing chiropractic care comes from the state of Oklahoma. In addition to chiropractors treating 3,490 cases of influenza with only 7 deaths, chiropractors were called in to treat 233 cases where medical doctors had cared for the patients and pronounced them as “lost” or beyond hope … Chiropractors took care of all 233 with only 25 deaths.

Now you must realize that it was estimated that 50-100 million people perished world wide.

Those under chiropractic care had a much better chance of survival. Why? Because adjusting helps the human body function at its highest level and allows the immune system to do its thing.

My strategies would include the following measures. Keep the body adjusted to ensure that your immune system is functioning at its peak. Wash hands especially when in contact with others that potentially are carriers. Get proper rest. Rest allows the body to fight the good fight. Eat properly and include antioxidants, colloidal minerals supplements. Include an exercise regimen to keep your engine functioning at its peak potential and of course have a positive mental outlook on life….