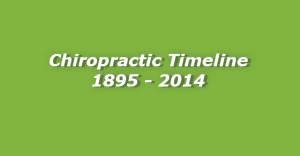 I was pondering how long and severe the winter was this year and realized that with June knocking on the door we are half way through the journey of 2014. I started thinking about timelines and decided to review the following….

1899 – The feud between Allopathic Medicine and Chiropractic begins

1903 – My father Dr Ernest C Huggins was born in Yorkshire

1906 – Dr DD Palmer is jailed for 23 days for practicing Chiropractic. They claimed it was practicing medicine without a licence.

1921 – Time magazine and Readers Digest begin publication . Now there are more than 80 schools teaching the art and philosophy of Chiropractic

1963 – A chiropractic supporter President Kennedy is assassinated. Chiropractic is licenced in New York.

1964 The American Medical Association has a clandestine faction working on the elimination of Chiropractic.

1976 – Chester Wilk and four other plaintiffs sue the American Medical Association for violating anti-trust laws and secretly trying to eliminate chiropractic. I graduate from Wilfrid Laurier with my baccalaureate in science and enroll at CMCC in Toronto

1980 – I Dr Brian Huggins graduated from Chiropractic College in Toronto

1987 – A Federal judge rules in favour of Chiropractic vs. The American Medical Association.